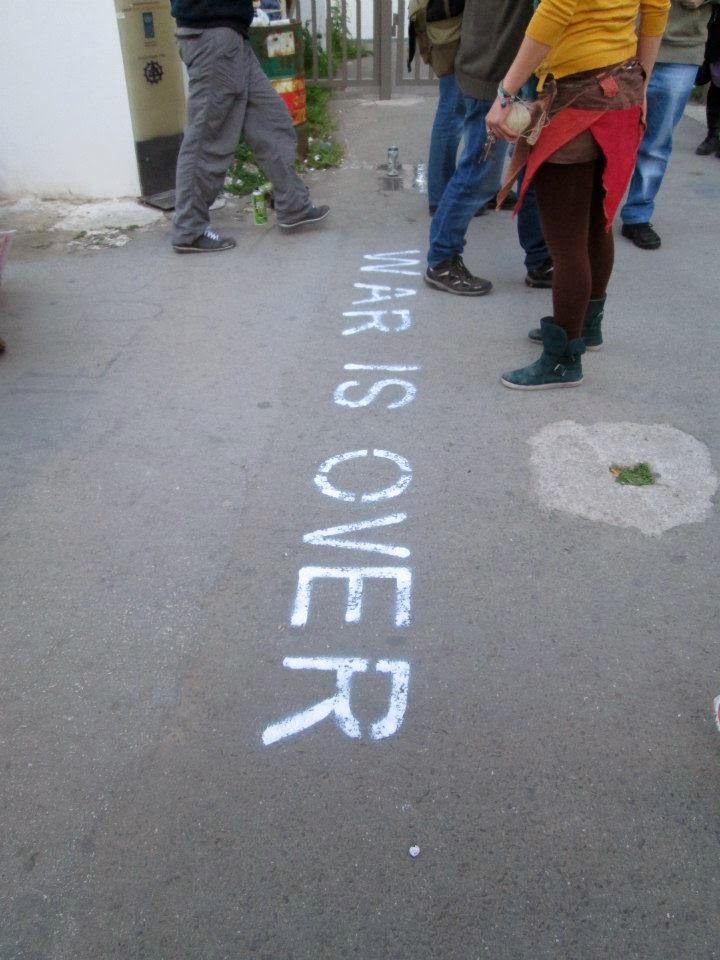 Last Saturday we participated in the unexpectedly occupation of the Green Line in the Buffer Zone of the Ledra / Lokmaci Street. This action along with the slogan “the war is over, if you want it”, was the response to the ban of the two parallel marches during the mobilisation for a  demilitarised Nicosia, which were planned to meet at the buffer zone, as well as an act of solidarity for Turkish Cypriot conscientious objector Murat Kanantli.

As far as we are concerned it is clear and proved in actions, that the ruling elite doesn’t want the oppressed classes to get involved in the resolution process.

It is also clear that the agony for the resolution of the Cyprus problem right now is directly connected to serve their interests in the region and particularly  the extraction and transport of hydrocarbons from Cyprus and Israel to central Europe via Turkey. In the process of this dealing, each side tries to secure as much profit as possible for its own ruling class and is very little concerned whether the reached arrangement will drive to yet another protectorate state dependent on NATO and the  EU, or whether the arrangement will also mean the end or not of the national controversy. This explains the fact that while in the past the United Nations had been encouraging bi-communal contacts and actions, now they became hostile towards them, especially when these actions come from the below and not from pro-system and neo-liberal political forces.

We believe that there is an even greater risk: An interim agreement to be made, settling the issue of hydrocarbons and garnished with some “confidence building measures” (Famagusta, ports, etc) in order to push for an overall solution in the long run. Therefore, the ruling classes would be able to implement their plans, while people in Cyprus remain trapped and harmless in a dead end national conflict.

The entrapment of the institutional left to the neoliberal visions of development – which, unfortunately, are also adopted by a part of the ‘extra-parliamentary’ left – are blurring more the scene and create false expectations. The latest example is the alleged possibility of the exploitation of hydrocarbons pooling from the two communities as a case of solution with big profits for the Cypriots. Amid  the economic crisis and with an EU as the tool in the hands of the capital and the oppressive elite, these expectations can create new intercommunal conflicts, as tomorrow they will fail in practice.

Certainly a possible solution creates a new reality in Cyprus. The abolition of internal borders, the withdrawal of Turkish and Greek military forces, as well as the dissolution of local armies, can only be identified as positive elements that can contribute to overcome nationalism.

At this conjuncture, however, it is important to express our demand for a solution outside of NATO and other dependencies, but mainly to prepare for tomorrow’s environment, the one after the solution, to connect with the radical libertarian forces of communities living in Cyprus and together fight against our real enemy, which is capitalism.

Along with these initial thoughts and mostly with continuous dialogue and joint activities with our class brothers and sisters, regardless of origin, we declare ourselves present in the struggle for a Cyprus of peace and social equality.