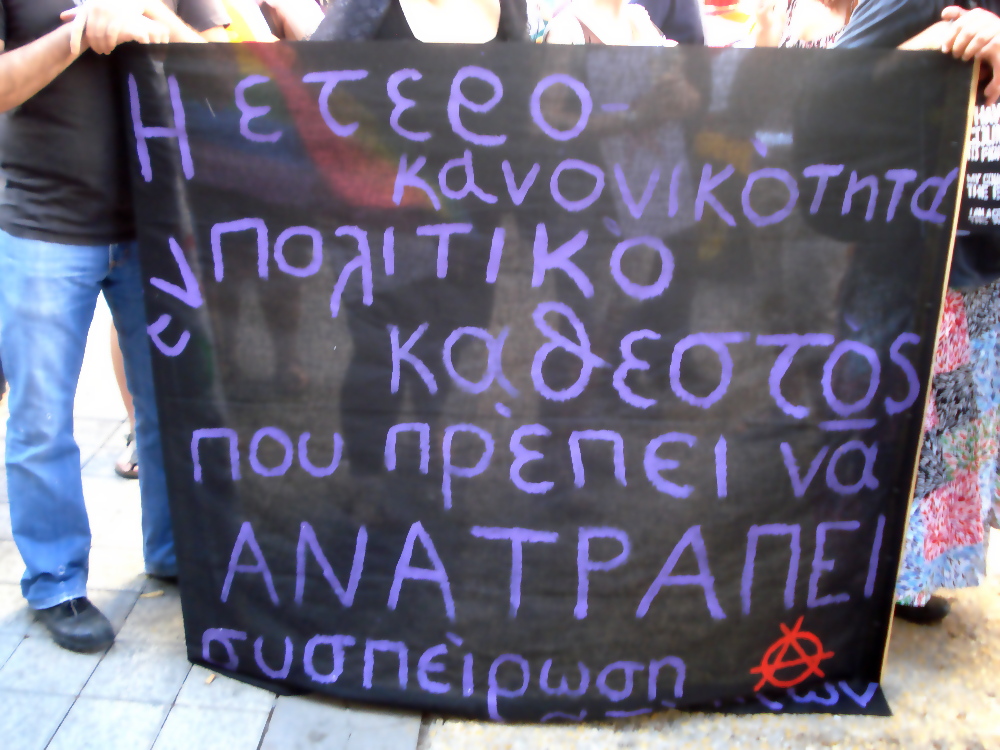 On the occasion of the first Prides (one in the North and one in the South) in Cyprus, we want to share our reflections on matters relating to the acknowledgement of the right to agency that every person should have over their own body, sexuality, and gender identity. Referring mostly to the pride which takes place in the south, we feel that we should clarify this: although it is organised “under the protection” of the institutional authority (so as to exercise social pressure on the issue of acceptance, regardless of sexual orientation or gender expression/gender identity), is being carried out first and foremost by the LGBTQ community, claiming visibility for the persons of the LGBTQ community, claiming inclusion for all genders and sexualities that have been oppressed over the years and are still oppressed within the well-established system of heteronormativity. The counteraction of those, who are oppressed, especially when it’s formed and run by the oppressed people themselves, should enjoy support from the whole society and especially from the antiauthoritarian scene: not in recognising the constitutional authorities that may lie behind the organisation of the Pride, but in participating, supporting, and connecting with a community that defends its right to be included in the social representations and claims respect for all, regardless of sexual orientation and/or gender identity.

The Pride festival -even the choice of the word Pride- is directly linked to the idea of ‘coming out of the closet’ and the feminist movements that demand the recognition of the personal as political: our very lives, the oppression, the violence, the control, and the power relations we experience on a daily basis in different aspects of our interpersonal relationships – whether we identify as gay, lesbian, trans, bi, or whatever else – is not a personal or private matter confined in the walls of our homes or in our bedrooms. It is a matter, which is mostly political, as it stands critically towards any normative and regulatory system of production of “normal” trends and tendencies, and aspires to deconstruct any patriarcal system where heterosexuality is the norm (and every other sexuality is excluded, deleted, silenced, and oppressed): It aims to expose any system that is sexist, or hierarchical in any other way, any power system, which promotes unequal treatment, oppression, and exclusion and silences and oppresses whatever deviates from the norm.

Exclusion is not a personal matter. The verbal or physical abuse of a trans person, or a homosexual person is not a personal issue. Violence is the product of a mentality, which considers a gender to be superior to other genders, a body more important than other bodies, a voice more resonant than other voices, and a life more worth-living than other lives. The domains of the weak and the powerful, those who are excluded and those who belong, are interchangeable within the system of political and social structures, which we fight. Therefore, Pride festivals are not mere festivities and -what’s more important- they are not mistimed, amid the crisis, as it is claimed by many: these festivals reclaim public space and distort the power of a discourse which operates to shape the represented reality in ways which create domains of abjected beings. These festivals constitute a reminder that all aspects of our lives are diffused with power and authoritarian determinations that segregate us on the basis of arbirtrary prejudices.

Therefore, because we desire to breathe freely, to live participatory, in inclusion and not exclusion, we deconstruct systematically the dominant power relations seeking to jointly shape a common context in which we will un-learn and un-discipline to any form of identification from above and to reclaim, through self-education, the control over our own lives, bodies, responsibilities, and desires.