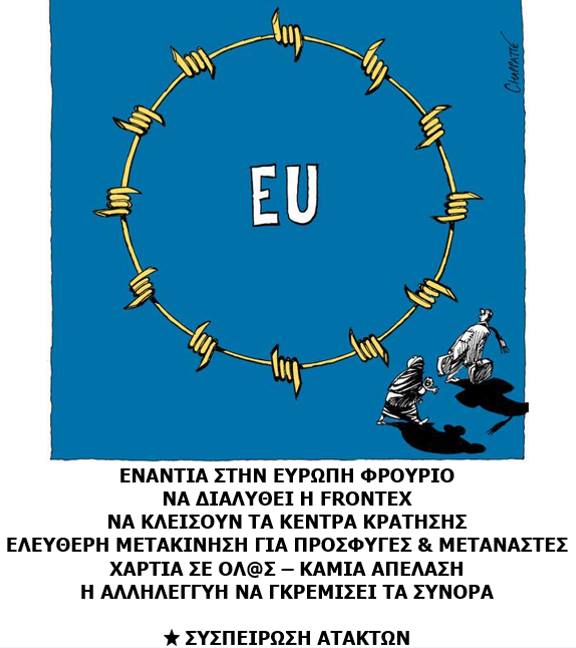 In an era when the waves of refugees and migrants are increasing due to neo-colonial politics and relentless bombings of the West, authoritarian and totalitarian regimes, religious fundamentalism and gruesome terrorism, extreme poverty and brutal exploitation, climate change, land grabbing and environmental destruction, we cannot remain indifferent.

We have become daily witnesses of the struggle of our fellow people (mainly from Middle East, Africa and Asia) who wish to pass through the borders and enter Europe, in search for a safer and better future. These people are literally giving a struggle for survival with their only expectation being a chance to live with peace and dignity. Many of these people however drown in the Mediterranean or get lost during their route, whereas others are sent back to their countries, where they face oppressive conditions, persecution and / or war. Those who make it and pass through the walls of Fortress Europe, face inequality and exclusion, institutional discrimination, xenophobia and racism, racist violence and fascist attacks, racial / ethnic profiling and police repression and the arbitrariness of power. They are often put in concentration camps (whether these are detention centres, or reception camps) or face brutal labour exploitation / human trafficking (in Cyprus this is mostly the case in agriculture and farming, domestic work, the construction sector and the sex industry).

Whilst there is a war in Syria and we witness the escalation of the largest refugee crisis after World War II; while we are witnessing the biggest migration waves in human history, the hypocritical “humanism” of the European Union (EU) and its leaders has as its main aim the safeguard of statist/inter-statist sovereignty, the strengthening of border control, increasing the army and reinforcing Frontex (a pan-European police against the so-called “illegal migration”), and the creation of more detention centres and the intensification of deportation mechanisms – procedures.

At the same time, EU member-states argue that they “do not have the capacity to make changes and improve the conditions that refugees and migrants are received, live, work and included in their country”. Thus, refugees and migrants, are presented as the “foreigners”, the “others”, the “different”; they become the homo sacers, the bear lives of whom are “demonized”. This creates an extreme anti-migration climate, while institutional discrimination and racism escalates and the welfare chauvinism of the “social welfare state” (meaning the preclusion of access of refugees and migrants to fundamental human rights and basic social services, like legal aid, health, education, housing, labour, etc.) is maintained, especially under conditions of a capitalist crisis and fiscal memorandums. This is how the far right and neo-fascism/nazism are reinforced.

The co-organization of a conference on Maritime Security by the Ministry of Defence of the Republic of Cyprus and the European Defence Agency (EDA) in the coming days is a provocation and has opened up for us a field of action.

The conference concerns the EU’s Maritime Security Strategy and focuses upon the strengthening of cooperation between the mechanisms of the armed navy and the coast guard, the stricter safeguarding of marine borders (especially in relation to the surveillance of the Exclusive Economic Zone, the marine communication lines and energy infrastructures of the EU member-states, as well as the transition and entrance paths of refugees and migrants to Fortress Europe), the reinforcement of the role of Frontex and consequently the increase of military expenditure and defence spending of the National Guard and the Coast Guard.

In the case of the Republic of Cyprus, these strategic aims are directly linked to the decision of the Anastasiades government to buy from Israel and/or some other EU member-state (most probably France or Greece) frigates/missile and ultramodern open sea vessels for the Coast Guard.

Faced with the human tragedy which is unfolding in the sea around us and along the coastline of the Mediterranean, we decided to intervene in this “cocktail party”, organized at “the highest political, diplomatic and military level”. Just like other initiatives in countries across Europe, we believe that it is up to the society and the social movements to put an end to this nightmare of bloodstained borders [1]. Faced with the bear lives of refugees and migrants, the flimsy boats which have been sunk at the bottom of the Mediterranean Sea, the mass deaths in the Aegean and Lambedusa, the persecutions/detentions and the deportations/refoulements by repressive mechanisms of EU member-states, we believe that the society and social movements not only can they not remain neutral (particularly during such high-level “cocktail parties” and “international conferences”), but they have an obligation to practically show their solidarity to refugees and migrants, and resist the plans of local and international elites.

It is exactly for this reason that we have gathered today outside of Hilton Hotel in Nicosia, against the “strategic maritime security aspirations” of Fortress Europe, against institutional discrimination and institutional racism, against deportations, persecutions and murders of refugees and migrants.

[1] See for example, the Initiative Against the Fence of Evros: http://syntonevro.blogspot.com.cy/