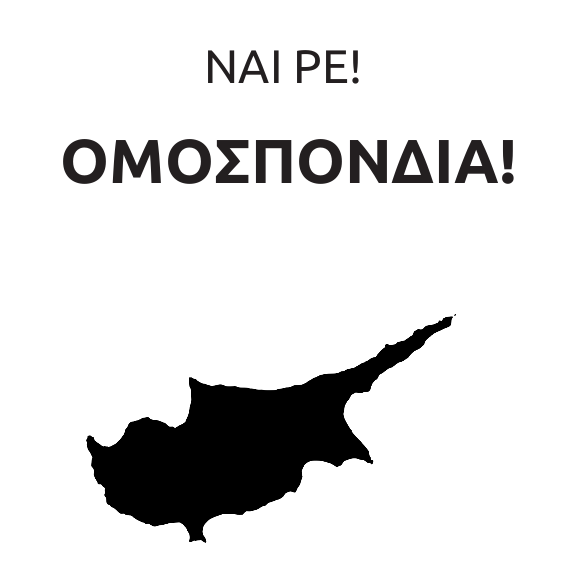 The Cyprus Issue has been, and continues to be an issue of power struggle between political elites. At the same time, it’s a matter of conflicting nationalist ideologies. For us, as anarchists and anti-authoritarians, solving the Cyprus Issue is of great importance as it negatively affects our daily lives, the society and our social relations, our political actions, and our struggles. We are opposed to the barbed wire which divides the island, to the walls erected between people, and to the way the Cyprus Issue puts obstacles to societal progress and radical action. We recognise that its solution will allow for the possibility to overcome nationalistic hegemony, and to undo the division of the island.

The Cyprus Issue has monopolised political discourse and the political scene of the island for decades. The rise of competing nationalisms and the manufacture of the Cyprus Issue from the 1950s onwards, essentially marks a reactionary sociopolitical transformation, by means of imposing a nation-centric,socially conservative, and fiscally liberal political discourse. This transformation oppressed common struggles and led to the further division of the communities. The class struggle and workers’ demands which became popular between the 1920s-1950s were pushed aside, the two most populous communities of the island were driven to conflict, and the smaller communities were marginalised, isolated, or assimilated. At the same time, the demands for unification with the “motherlands”, be that “Enosis” for the Greek-Cypriot or “Taksim” for the Turkish-Cypriot community, gradually led to creation and domination of military and paramilitary groups, to the bicommunal unrests and the creation of enclaves in which the Turkish-Cypriots found a refuge. These were events which peaked leading to the coup d’etat of the Greek junta, the invasion by Turkey, and the division of Cyprus.

After the disappointments of 2004 and 2010, we experienced stagnation not only at a higher level and the official negotiations, but also at the level of joint bicommunal and intercommunal struggles and actions. Nevertheless, there were parts of the society which never stopped claiming a common space, envisioning a common future. The Turkish Cypriot protests of 2011, the Occupy Buffer Zone in 2011-2012, and the many common actions on issues like antimilitarism, education, and ecology, kept the bridges of reunification open. As we find ourselves in the middle of the negotiations for the solution of the Cyprus Issue, and as we are possibly before a very crucial moment which will either lead to failure or to a proposed plan that will be put to a referendum, we consider it our responsibility to publicly take a stance against the anti-federalists, and in support of the federal reunification of our country.

We consider that the political solution of the Cyprus Issue within the framework of the Bizonal Bicommunal Federation (BBF) is essential. A solution under a framework of a ‘unitary state’ ignores the failure of the 1960’s ‘unitary state’ and its consequences. With the ethnic majority (namely the GC) imposing themselves upon the minority (TC) the conflict between the two communities intensified, something which led to the partition of the island. Supporting the unitary state accepts thus a fait accompli, and consequently to partition, whilst it fails to comprehend the mistakes and failures of the majority. We, contrary to the advocates (of various ideologies) of the ‘unitary state’, consider the ‘unitary state’, the one-person-one-vote principle, and thus the rule of the majority to be “racist” arrangements, since they always lead to the marginalisation of ethnic and other minorities, creating political and social exclusions. It is time for the majority, the Greek Cypriot community, to recognise their privilege on one hand, in having the monopoly of the “legal” state for so many years, and to recognise the isolation of the Turkish Cypriot community on the other, within a regime that rendered them invisible to the global stage.

We support the BBF solution, not as a “painful compromise we are forced into in order to avoid the partition”, but as the ideal institutional solution (“Even if Federation didn’t exist, we would have had to invent it”, Traino, Issue 10, 1993), since it recognises the historical,geographical,and political reality of Cyprus; it gives autonomy to the communities but also space for coexistence for those who do not place themselves, nor recognise ethnic identities. We will have the opportunity, to redefine identities of “one-Self” and the “Other”, and the notion of borders. We will thus be able to create new identities; ones which will not be based on exclusions, since they will be relational and they will not rely on divisive dichotomies. Rather, they will be formed and transformed based on our contacts and relations between us,and between us and our environment.

On the other hand, we are not deluded. We know that after the solution, ethno-communal conflicts will not be magically disappear. For us, a solution is something much more than a set of signatures. It is a process that starts before, and continues after a plan is agreed upon. It has as a prerequisite the emergence of a different narrative, and above all, of a different reality that overcomes borders and ethnocentrism. The political solution to the Cyprus Issue will disrupt the dominant order, something that will allow us to come together, to think, and to act within a new framework. The division will no longer be used as an excuse for any measure that attacks the interests of the people. The “State of Emergency”, that legal pretext upon which the actions of the G/C elite since 1964 rely on, will cease to exist. The integration of the geographical space, and the new framework of coexistence that will be created will facilitate our common struggles, which will become stronger and more effective.

Moreover, the two communities in Cyprus will experience more freedom, and considering the lessening of the T/C community’s dependency on Turkey, there will be a much wider room to constitute joint, bicommunal fronts protecting our independence from the “motherlands”, but also to oppose the British Bases. Solving the Cyprus Issue will be the most grave defeat of militarism and its advocates, who truly benefited financially and gained political surplus value from maintaining a state of war in the island. Beyond the immediate demilitarisation of the of the island, the disbandment of all armies will offer us that framework we need to fight against the militarisation that dominates all aspects of your life, to the patriarchy and sexism on which militarism relies upon for its reproduction.

Even if at the same time the educational systems remain segregated, the reunification will offer the opportunity to start a substantial dialogue —within the communities, as well as between them— with the aim of developing an educational system liberated from nationalism, racism, hatred, and the hegemonic discourse of the Church. In a reunified country, sensationalisms like the letter of the mother asking her child to be exempt from studying T/C poetry at school would fall flat, since cultivating a culture of peace won’t be just a goal, but a generalised need.

The struggle for secularisation, not just of the educational system but of the state and society in general, will be carried out by all communities, and the secular character of the T/C community will greatly help the advocates of secularisation in the G/C community. Sentiments often expressed by the leadership of the Church on matters of gender and sexuality for example will be judged on a federal level and not just within the G/C community, exposing them to harsher criticism.

The struggle against the appropriation of the Commons, land-grabbing, and environmental destruction will have a much wider scope. Our actions to prevent environmental destruction in Mount Pentadaktylos/Beşparmak, in Androlykou/Gündoğdu,in Karpasia/Karpaz, and in Akamas will be united and will have the same goal: to combat the neoliberal and anti-environmental policies of the federal government and the business-owners who will operate under its protection.

We hope to fight shoulder to shoulder with all residents of the island, regardless of their constituent-state of residence, and without giving any merit to their designations as “illegal immigrants”,“gypsies”, “Anatolian settlers”, or “bureaucratic remnants from Greece”.

The notion of “rights” still is one of the central points, if not the most central, in the negotiation process. The Rejectionist camp as well as the neoliberal supporters of the federal solution focus on one hand on the individual rights (mainly) to property, and on the common financial benefits of reunification on the other. Thus, the Cyprus Issue and its solution or non-solution is examined with the neoliberal lens of financial interests. Our “Commons” thus, are presented to the society by the political and economic elites, only as “common” interests which can only be financial. This can seen especially in the case of the hydrocarbons reserves, the potential extraction of which is systematically presented as the catalyst for achieving a viable solution on the one hand, and as our ticket out of the financial crisis on the other. For us however, the notion of the “Commons” has a different meaning. It has to do with a new imaginary that is being created. It is a mosaic of ideas and consciousnesses that surface through a new understanding of our ‘common’ geographical, ecological, historical, social, and cultural. Though some of these existed before the 1960 when the Republic was formed, for example the common workers’ struggles and the mass strikes that reached their highest point in 1948, they are now being revitalised and recreated by old and new generations alike. It is this new imaginary that we consider it will gradually lead to coexistence within and between the two communities, as well as of the society in general with its natural and urban environment.

It is obvious that after the solution we will not live in a post-state context. We will continue to live under the control of a state, operating within the capitalist system. That state will be called to react to certain geopolitical circumstances and it will use all the apparatuses in its disposal to enforce its power internally. We do know that we will have to fight against the policies of the federal state and the constituent states alike.