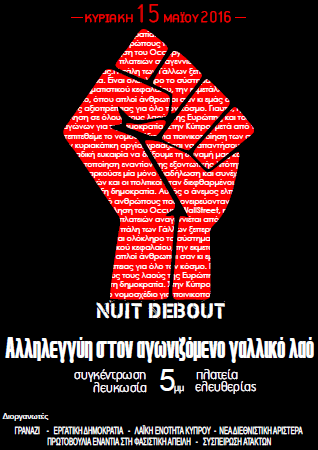 The 15th May 2016 should mark the emergence of a global consciousness! We are the 99% and together we can change the world! Massive protests that started in France on March 31st against the anti-labor reforms are still going on with thousands of people gathering and occupying public spaces. Through daily assemblies and increasing participation, protests have now taken the form of complete rejection against the existing system of governance. After fierce repression, the
protesters continue their struggle and are calling for
global solidarity actions on the 15th of May.

Responding to this call, organizations and movements in Cyprus call for a solidarity event which will be framed within the local context.

On May 15th, at 5 pm, in the Eleutherias Square, we invite you to join us in expressing our solidarity to the French people in struggle, and the Nuit Debout (Standing Night) movement.
In “Post-Memorandum» Cyprus, we invite everybody feeling affected by the Memorandum and the neoliberal policies implemented by the Cypriot government. We invite all those
groups and movements that have given dynamic battles during the past period, such as the nurses, the workers in FBME, the movements for reclaiming the Commons – like Save Akamas and respective movements from the north, to come together and express their solidarity to the French protesters, learn from them and united prepare for the future attacks our governments are planning.