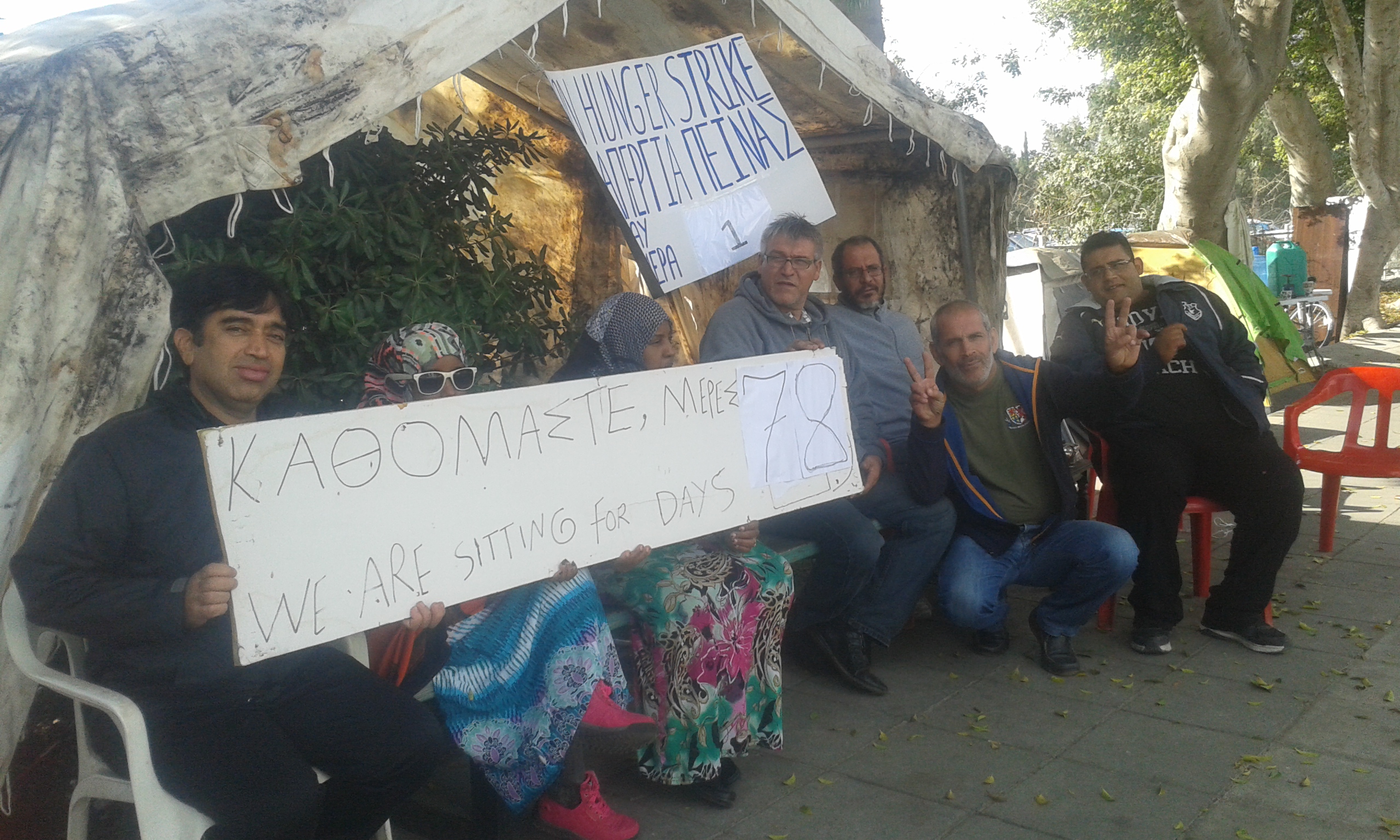 Since September 2016, a group of 12 refugees was protesting outside the parliament for more than a 100 days, the last 20 of which were a hunger strike.
Their demand was that the procedures required for the examination of their citizenship applications commence without arbitrary delays. Their applications were inexplicably stalled for months and even years in some occasions, so in September they saw no other way than to publicly protest, right outside the building of the Legislative branch of the State.

Unfortunately, this wasn’t enough to apply any pressure on the State. They were ignored by the MPs and the journalists covering parliamentary affairs for more than 80 days of protest. On November 16th they decided to escalate their protest, going on a hunger strike, but this didn’t break the information embargo placed on their struggle.

Up until the final days of their hunger strikes, there was no coverage by the mainstream media outlets (press, TV, or radio). The only coverage of the struggle came from KISA through press releases (since Sept. 8th) [i], Syspirosi Atakton through announcements, leaflets, posters, mass-emails and videos  (since Oct. 9th) [ii], and the Independent Media Collective “35-33.com” through news-posts and a short video documentary (since Nov. 23rd) [iii]. The only exception to this embargo was a short coverage in the online-only version of Dialogos, which nevertheless covered Social Space Kaymakkin’s solidarity event, and did so in the “Photo of the Week” column, and not in the news section of the site [iv].

The struggle would see no more mainstream media coverage until the final few days of the hunger strikes, were the refugees suffered serious health deterioration that required the prolonged hospitalisation of one of them. Even then, the coverage was one-off, and came only from 3 online-only newssites (Dialogos, Sigmalive, Reporter). There was no print, TV, or radio coverage.

The media coverage was too little, too late, and it didn’t manage to apply pressure on the State before the refugees significantly affected their health and wellbeing. In the end, what probably put pressure on the Ministry was the decision by the refugees to move their protest outside Hasikos office, after which the refugees received a written commitment (that is still not implemented 2 weeks later) saying that examination procedures will commence. The deadline adopted by the Ministry themselves expired on the 15th of January, but so far only one person was invited for the interview that is part of the procedure. Lack of media coverage allows the Ministry to act arbitrarily and break yet another promise, since there’s no media to follow up on the story.

In fact, TV reporters visiting the parliament pretty much every day refused to even shot a 30 second piece about the struggle despite multiple pleas by the refugees and those protesting with them in solidarity. Press media wasn’t persuaded to even print 50 words about the issue. We never thought this resistance by the media is anything else but racist. An example of this deeply rooted bias came on December 20th, when the highest circulation newspaper in south Cyprus, Fileleftheros, published an appeal by another person trapped in the webs of the racist Cypriot bureaucracy [v].

This person, like the group of refugees, lived in Cyprus for more than 10 years, and has no country to return to other than Cyprus. He is ignored by the Ministry of Interior since April 2016. What is the crucial difference between this person, and the group of refugees? The person who made it into Fileleftheros’ pages is a stateless person of Ukrainian descent from Crimea (a territory that was annexed by Russia), not African or Asian. More over, this person also expresses willingness to be conscripted by the Greek Cypriot militia (National Guard) and “serve the country” (of course, the NG is not even an army of the country, but a militia of an ethnic community). Because of those attributes, the most mainstream newspaper is not just publishing the story, but is also editorially sympathetic to it.

The still-ongoing struggle of the 12 refugees once again highlighted the necessity for independent, radical mass media. “Social” media, by design, are creating echo-chambers, that is, they circulate news only among like-minded people, and they are curated by algorithms to maximise profit, not social change. It is no accident that the radical movement in many parts of the world puts emphasis on building its own mass media: from (pirate) radio stations, to high-circulation newspapers, to global newswire (news agency) services like anarkismo.net and Espiv’s ContraInfo. In Cyprus we didn’t manage to achieve this yet, although one long-lived attempt is the 35-33 Media Collective, but which sadly has no regular contributors.

In Cyprus we face the extra challenge of the radical movement (and therefore its media) being divided geographically in north and south, and linguistically in Turkish and Greek without a robust network of radical translators acting as bridges (see Espiv’s ContraInfo for an example).

Syspirosi recently began “One Radical Planet” (https://planet.syspirosiatakton.org/), a website that tries to slightly improve this situation, by aggregating publications by as many groups and individuals who are relevant to our common struggles as possible in a single place, but this is no replacement for radical mass media and a self-organised translation network.