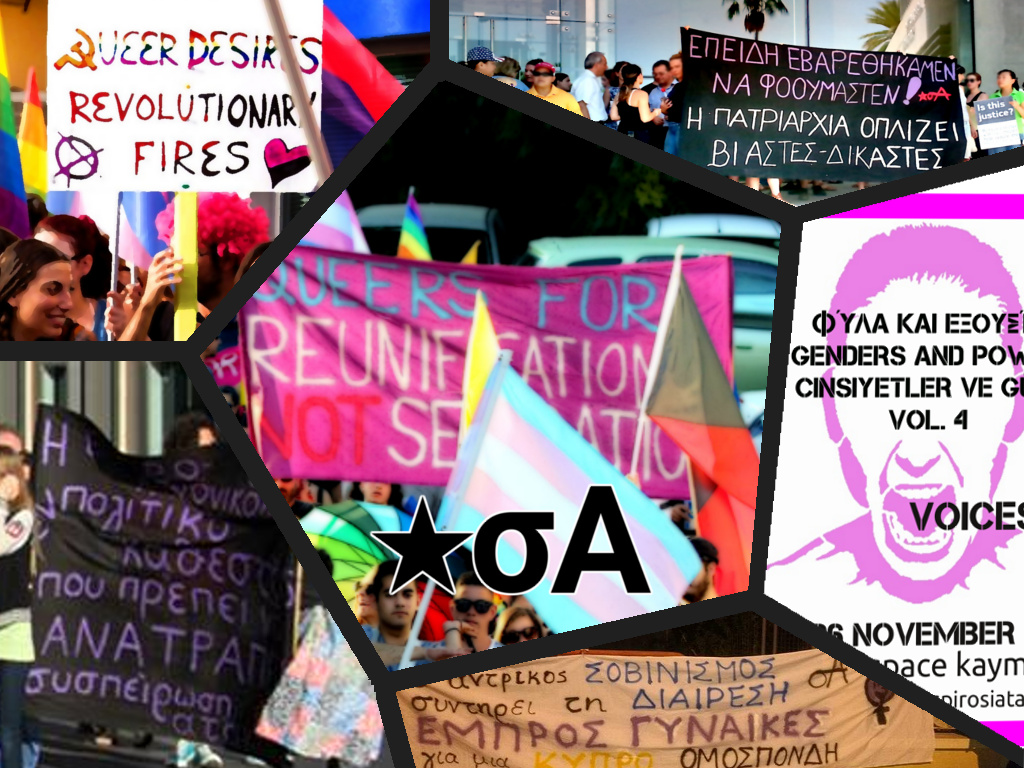 On May 28th, responding to a call by Queer Cyprus Association, which is active in the north of the island, we participated in the “Pride March” organised by accept LGBT Cyprus in the south. After all, QCA’s call is something we also get behind:

[…]Due to the capitalist and patriarchal system prevailing on our island and various places all around the world, as well as homophobia, biphobia and transphobia, many people are subject to discrimination and violation of their basic right to live.

Like all segments of the society living on the island, we the LGBTI as well are effected negatively by the division of our island into two, by the fact that 6 different armies exist on it and the solution process has not been completed for very long years.

For this reason, it is very important for us to state that as people from the north, west, east and south of Cyprus, all that feel a sense of belonging to the island come together and struggle against geographical and mental divisions, voice that peace process is not only about an agreement reached on paper, and above all to express that we can talk about a true peace, only after homophobia, biphobia and transphobia ends, in a Cyprus and a world where no one is subject to any form of discrimination and where we can coexist in diversity.
Real peace is within our own hands and it will not be made behind closed doors, but in the streets, by us. […]

Our participation was a continuation of our common struggle on issues of sexual and gender liberation, struggles against heteronormativity and patriarchy which we fight by overcoming the dividing line, be it by participating in the “May 17th Organisational Committee” which carried out the “March Against Homophobia, Biphobia, and Transphobia” this year, by co-organising the Queer Street Party, or be it through our yearly “Genders and Power” queer/feminist festival, events such as “Beyond Gay: The politics of pride” and our interventions against rape culture which is diffused throughout the Cypriot society, north and south of the nationalist divisions.

We were there to support our Turkish Cypriot LGBT and queer comrades in their demand to be treated as equal members of the LGBTQI community in Cyprus, and not as decorative ornaments and “poor relatives”, as it is the current feeling that accept‘s stance causes.

We remind that it is this very accept that excluded them from co-organising the first PRIDE, under the excuse that the participation of Turkish Cypriots in such a visible level was “too political” and thus it would cause tensions between accept and their political partners, on which they place their hopes for legislation that affects some LGBTQI+ people. It is the same organisation that would later create events for Turkish Cypriots, without them (a stance they keep regarding various parts of the community (eg bisuxuality, or gender-queerness), whom they treat as mere decoration in the “LGBT” acronym). And it is the same organisation that, this year, placed the Turkish Cypriot representative on the stage between two nationalist politicians who promote the permanent partition of Cyprus, all these under the auspices of the President of the Republic. And it is the same organisation which prohibited our comrade from stepping on the stage as the interpretor of Queer Cyprus Association because of her actions protesting the pinkwashing operation accept runs. 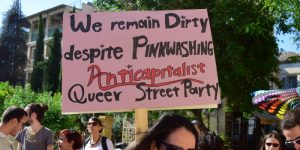 Beyond this, for us, being present at accept‘s event is only meaningful as an act of resistance against the buying and selling of our identities in the political and capitalist marketplace, in which accept took up the role of sole distributor. It is a PRIDE that in its first year was sponsored by the states of Israel and the USA, two ultranationalist militarist states which ravage the Eastern Mediterranean and our broader geographical region. It is a PRIDE sponsored by private corporations, and any action within it is guided by market motives (ACCEPT’s document on organising independent events in the framework of Pride Week is worth a read – it’s a text that is fitting of a company renting out their franchise, and not one of a —supposedly— human rights organisation). 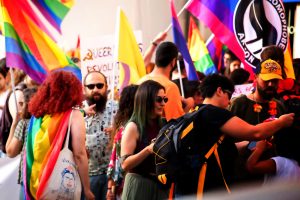 We compare accept‘s commerical festival to the movement-based structure of the “May 17th Organisational Committee”, the participants of which are labour unions, political groups, teacher and student organisations, feminist initiatives, and cultural associations. Where everything is done on an equal and direct democratic fashion, with consensus and a respect of political autonomy, without sponsors and entrance fees.

The LGBTI and queer people of the anarchist and anti-capitalist movement, and our cis and straight comrades and accomplices in our demands, have no common interests between us and those who patiently wait to be included the capitalist system, the heteronormative order, and gain representation in the statist and militarist structures (antifa λευkoşa laid out a great critique)

We do not apologise for claiming space and speaking out, nor for standing opposite our self-proclaimed “representatives”, and their “honourable” guests.

We speak for ourselves, we organise, and we do not beg the state for anything.

One Comment on “Intervention at PRIDE: We Speak Up, We Organise, We Beg For Nothing”